Posted at 20:46h in Allgemein, Categories, Lifestyle by DanielToni

Everything you need to know about this new App „ VERO“

it´s been a while since I was writing an English Blogpost, but the last two days really made me write something about the new social network „VERO“ that everyone is talking about at the moment! I signed up to (Vero: @Daniel Toni Jais)! Here are some thoughts about it!

So what is Vero?

Vero is a Social Network, actually nothing completely different to Instagram, but there are some differences you guys might be interested in. The first thing is, that you can share nearly everything, not just pictures and videos, you also have the opportunity to share links, music , books, films & places. Pretty cool huh? Another point is that there is no algorithm and ever post is shown to you chronological, which I think is a really big plus comparing Vero to Instagram, as I know that not all of my IG-followers see my posts constantly. This also means the they’re not mining data from anyone, ever, well thats what they say in their promotion video!

The app-design is really appealing, as it´s kept quite minimalistic, contemporary and dark, wich I like.

Who sees my posts?

Like you know it for example from facebook, you have the opportunity to share something with the exact people you want it to share with. On Vero this is called „audience selector“. The four groups you can choose from before posting something are „close friends, friends, acquaintances and followers“. Not needing to have two accounts (private/business) could probably be a big plus for many people out there. 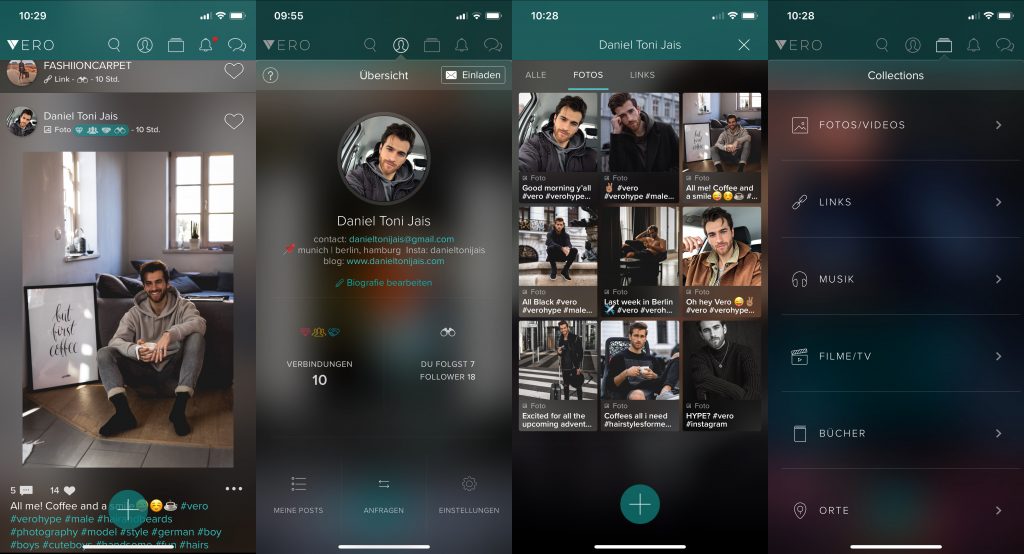 What is bad about Vero App atm?

Because so many people signed up to Vero the last days, they’re having some server-problems, that they’re trying to solve, as they said on their twitter account! Thats why its super slow and  pretty hard to post, like, comment on there atm. Apart from that I heard a lot of bad stuff about the co-founder of Vero and that people should pay for Vero sometime.

Next to this, for me personally a feature like „Stories“ on Instagram is missing. Vero is already three years old, so that´s really something they should work on, if they want to compete with all the other big social networks.

I´m really excited about the next weeks! I’m also excited, if Vero can be an serious competitor to Instagram! What you guys think? Could this be the next level being social online? I´ll give it a try, but I still love instagram, so lets see what happens, and connect on both the apps 😉